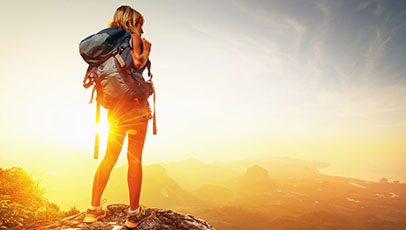 Do you have friends who invite you to do something with them, like say, take a bike ride? You’d love to go, but you decline. You say no, because you KNOW these friends. You know that a bike ride with them might mean going 10 miles, or more! And you’re not sure you can do it. You really do want to go, but the thought of quitting halfway through, or struggling mightily to keep up with them, scares the wits out of you!

Getting over your fears

If you have something you’d like to do, but fear gets in the way, Fearless Chix is the perfect organization for you! We’re everyday people. We are a team of knowledgeable adventurers that like to help others conquer their fears. We love showing people what they CAN do. And we do it responsibly. We tell you what you can do to prepare. We have phone calls to ask how things are going. We organize training events to keep you on schedule. And we support your efforts. And it’s not just about your physical training. We answer questions for you. What to expect. . . What to wear. . . What to bring.

How does it work?

We begin at the beginning. We take you through the process. And everything we do is in a controlled environment. So you CAN get over your fears. You can feel accomplished. And you can start doing things that you’ve thought about but lacked confidence.

Fearless Chix is not about rafting the Amazon River, or training for a marathon. It’s about trying to do things that you may be a bit afraid of.

Recently we had a client who wanted to do a hike that included a rock scramble. We found the perfect location, and it was one we had walked before. We chose Savage Mill, Maryland.

Prior to this hike adventure, we had completed several hikes and taken an indoor rock-climbing class. Like we do with all our adventures, we came prepared and were dressed in our outdoor gear.

Our adventures require us to track the weather. Though it had rained the night before, the day of the adventure was warm and sunny.
We scooted over the rocks without too much difficulty. And, we walked over some as well. We laughed, talked and challenged ourselves. Nothing too strenuous. But when you have a fear, it’s sometimes hard to try something outside of your comfort zone.

We had fun but were ready to go by the end of the adventure. As we were leaving, we looked up and realized our safest route led us straight up a hill to the pathed trail. Low to the ground, we crawled up the hill. With every inch upward however, we found ourselves sliding down two steps. No, make that three or four steps down. Two weeks of rain made the ground soggy. We weren’t going anywhere! It was a scenario where people could get easily frustrated. It happens. You may even say a cuss word or two. But our indoor rock-climbing class prepared us. Using the tree trunks, we were able to get solid footing and pull ourselves up the hill.

Afterwards, covered in dirt, we laughed – and celebrated. It was the greatest feeling! We had managed our anxieties, got our lovely new hiking gear filthy but we also applied what we learned to reach our goal. We left that day feeling like we could accomplish anything!

Back at the car, smiles broad and “high-fives” all-around, we congratulated everyone on a very successful adventure, and another learned capability!

We can help you overcome the fear and succeed. We’ll provide classes. We start at the beginning. You gradually gain knowledge and confidence. Everything we do involves research and certified guides with several years of experience.

Want to try stand up paddle board? How about an overnight hiking trip? What’s your greatest fear? Give us a call or contact us. Let’s discuss the next adventure!

I hope you’ve read our blog article on a Hiking Challenge If so, you know how Fearless Chix loves to show people what they can do – and how we do it in a safe, controlled environment.

For this article, let me share with you my personal journey into backpacking. I have friends who backpack. They always talk about the serenity of the trip, the terrain, and how they feel so good afterwards. I wanted to try it, but I had this fear in the back of my head that I wouldn’t be able to do it. I was even more fearful of going backpacking with friends who do it regularly. I would be so embarrassed if I failed! And I was afraid I would ruin the adventure for everyone else. I was both mad at myself for not trying and yet, too intimidated to try. Fearless Chix offered a beginner’s backpacking trip and I signed up for it!

Dayna is Fearless Chix’s backpacking Coordinator and she loves being outdoors. Dayna researched backpacking trips for almost a year. She slowly collected gear for the event. So when I asked if Dayna would take the lead on the trip, she immediately accepted.

As I mentioned above, Dayna investigated various trips, mostly around the MD/VA/DC area. She also looked into the gear we would need and how we would carry it. She arranged phone calls on a routine basis to see how we were coming along with our hiking and walking skills. She also talked about what we would need on the trip. She sent lists. And she gave us advice on what to pack.

We decided to backpack a segment of the Appalachian Trail in Virginia. It was nearby, and the history of the trail was intriguing to us. We also knew we would probably run into other hikers, which was also appealing.

One June, we took the challenge and began our journey. The idea was we were going to hike a segment one day, stay at a shelter for the night, and hike back the next day. We brought provisions with us. Our plan was to backpack in pairs – so two people would always be together.

In truth, I struggled with the trip. I had not backpacked before and I was not a strong hiker. It was a challenge for me to keep up with the group. So I often lagged behind. But Dayna would stop along the trail and wait for me to catch up. That way, I always knew that the group was around the corner!

Lesson one was – I need to learn how to pack! Oh boy, did I overpack! And I was reminded of that quite often. One of the nicest things that happened on the trial is that we encountered numerous other backpackers – all of whom were willing to share stories and advice. And they always made sure we had enough water. These people gave me words of wisdom that I will never forget. Their enthusiasm was contagious.

Meeting other people was definitely a highlight of the trip. I met one guy on my way home the second day who was incredibly nice. We talked for a while and he encouraged me to keep going. Just talking as I hiked made me enjoy it even more. Here was another person who raised his eyebrows when he saw my backpack! Yes, by then I knew I was carrying too much – it was weighing me down. He knew I was discouraged. But this guy was so nice that he offered to carry some of my stuff for me. And so there I was, on the trail, going through my backpack – dividing my belongings and deciding what I would carry and what he could take for me. The idea was, after the trip, we would meet and I would pick up everything he carried. And yes that’s exactly what happened.

First and foremost, I learned that you meet the nicest people when you go outside your comfort zone. When I admitted that I was a little overwhelmed, they took me under their wing and made me see that I was doing it. I was going to succeed. In fact, I realized that this entire trip was actually a life changing experience. Finally, I learned that I need a packing class! No joke. There is a talent to packing lightly!

I also learned that nothing is quite so sweet as Success! As we wrapped up our second day and I saw Dayna waiting for me at the end, I was almost in tears! Not only was I done, but I had succeeded. I knew so much more now than I did two days earlier. Facing an obstacle, meeting your fears and conquering them is a high like I’ve never had before!

Why don’t you join us?

Give us a call or contact us and let’s discuss that adventure you’ve been thinking about but are a little too scared to commit!